Centerpin and float reels are designed to be the ultimate float fishing reels, providing a drag-free presentation for float fishing for salmon and steelhead. Centerpin reels can be compared to fly reels in basic design, but are much larger in size. Traditionally, there is no mechanical drag on these reels, allowing the spool to spin freely, creating a natural drift for the bait presentation. This is the great advantage of float fishing, as the intention is that the bait or fly is the first thing the target fish sees, rather than leaders, fly line, or lead shot, which can all spook these line-shy fish. Palming the reel to control the line tension while fighting the fish is a skill easily learned by those using traditional centerpin reels with no drag. Anglers new to the tactic may find the few models which feature mechanical drags easier to land fish with, based on their previous experience with other reel types. Centerpin reels are famous for the smooth, free-spooling drifts they allow, but in the hands of an experienced pinner, these reels are also capable of long casts that can rival any spinning reel. Whether shopping for centerpin and float reels with drag systems or no drag, All Seasons Sports, Inc offers a full line of the smoothest, strongest reels available. 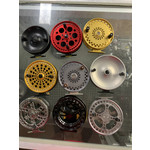 © All Seasons Sports | Webshop design by OOSEOO | Powered by Lightspeed
(0) | $0.00
Please accept cookies to help us improve this website Is this OK? Yes No More on cookies »